Guy throws himself into diving challenge 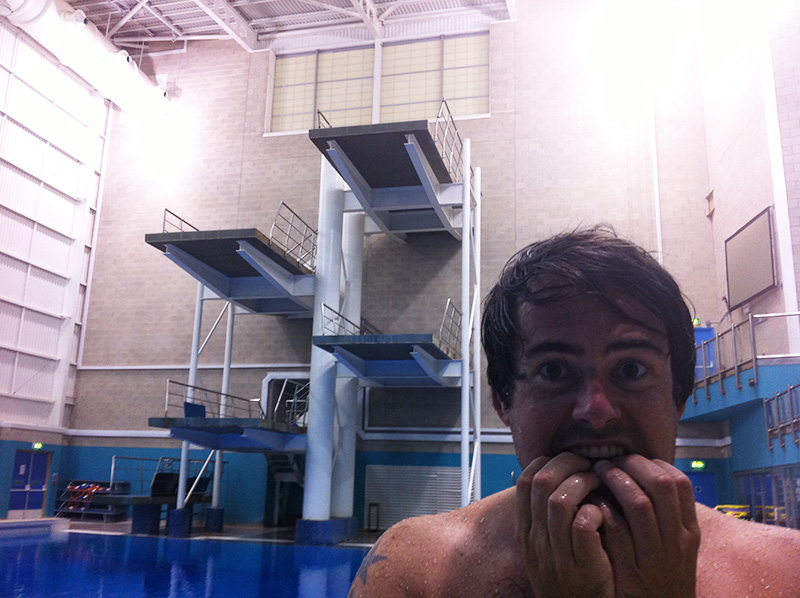 In his first blog on the subject, our Head of PR Guy Atkinson talks us through his first ever diving session as he gears up to compete in Leeds Diving Club’s inaugural (and very appropriately named) ‘Splat!’ competition at the end of September.

Have you ever enjoyed that feeling of taking up something new and just nailing it straight away? That sensation of enjoying such a perfect harmony between body and mind that you’re able to perform the task with minimum fuss and effortless beauty that leaves you wondering why on earth you hadn’t taken it up sooner? Just imagine that feeling for a moment…it feels great, doesn’t it? Well, imagine the complete opposite of that feeling and you’re somewhere near how I felt during my first ever diving session.

I can’t even put my decision to compete in ‘Splat!’ down to the folly of youth as at the ripe old age of 29 I really should know better than to put myself through the unbearably public humiliation of tumbling from diving boards with all the grace of a drunken dad attempting the Gangnam Style dance at a wedding.

Armed with an oversized pair of football shorts (I’m holding back the speedos for the main event…maybe) and a coach who has competed at two Olympics, I approached the 1m board for my first ‘dive’ (basically, it was a feet first jump) brimming with a severely misplaced confidence. No sooner had I slipped through the water like a pencil from that board (this is what it felt like in my head – it was probably more like a Twiglet) and I was up to the 3m, 5m and 7.5m boards to undertake even more challenging jumps, which somehow I managed to execute.

Then after less than 15 minutes of my first session I found myself at the end of the 10m board and my heart felt like it was pumping outside of my chest in true cartoon style. I genuinely don’t think I’ve ever been as scared in my life as when I looked down at the vast expanse of water beneath me, knowing that my not-so-slender frame would be thundering into it at around 30mph. I gave myself a little pep talk that went something like “if you really want to be Tom Daley’s synchro partner at Rio 2016 you’d better chuck yourself off here now big fella” and before I knew it I was freefalling to what felt like an imminent death.

As it transpired, I escaped with a jaw that felt like it had taken an uppercut from Mike Tyson, ears filled with water, a mild headache, a winded stomach and arms I could barely lift above my head, so all things considered a marginally better deal than death.

After that frankly mental flirtation with the cruel mistress that is the 10m board, I moved onto the more sedate surroundings of the 3m platform and 1m springboard for a few actual dives, rather than feet first, which gave me a tantalising glimpse of what I’ll be getting stuck into at my next lesson.

All-in-all, it was a truly exhilarating experience and I walked out with a swagger thinking “screw Rio, I’m aiming for the Commonwealths next year!”

Guy will be writing more blogs about his progress over the coming weeks so keep checking back to see if Tom Daley will indeed have a new synchro partner for the Commonwealth Games next year (we know where our money is… sorry Guy).