I’m a photographer not a terrorist! 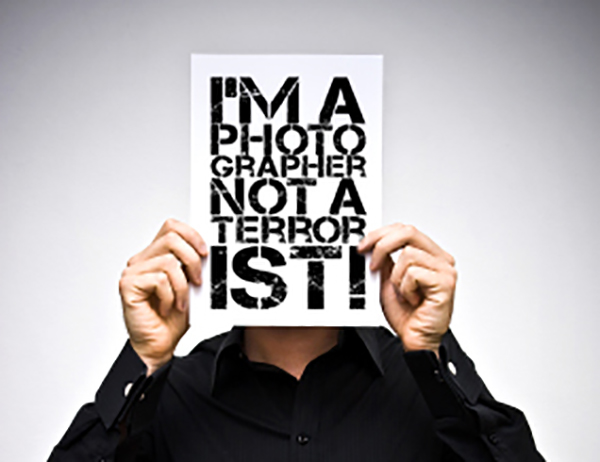 Photography is under attack from beaurocracy, misguided public servants and the misuse and misunderstanding of the law. Across the country it seems anyone with a camera is being targeted as a potential terrorist or paedophile, whether amateur or professional.

A campaign has now been formed – I’m a photographer not a terrorist! – to co-ordinate a collective response to the restrictions on photography across the country.

I’ve been a professional architectural photographer for over 20 years and have to say that I’m seriously disillusioned with the restrictions that are creeping in to my every day work, largely as a result of over-zealous public servants who make me feel less appreciated than a traffic warden!

“Just call in and shoot the new school on the ring road for me,” said an architect client, “and make sure it looks as though it’s been designed for children.”

Easy to say, less easy to do. CRB checks, data protection, Duty of Care and the soon to be introduced VBS scheme all provide education establishments with seemingly good reasons to prevent a photographer doing his job. And the very idea of including children in the pictures is treated with such a degree of suspicion that I have become almost convinced that I must have a deep rooted psychological disorder!

And how many of us in the photographic world have experienced the use, or misuse of Section 44 of the Counter Terrorism Act? I certainly have. Only recently I was photographing from a public space, a social housing scheme in London, and although perfectly legal in law, I was stopped by a police officer and asked what I was doing. When I explained that I was a photographer and commissioned to photograph the building by a client, he wanted personal information and client contact details. And, despite my protestations that I was not part of a terrorist movement dedicated to the destruction of low-rise public sector housing in Brent, under the guise of the Counter Terrorism Act he was not prepared to let me wander the streets of London until he had cleared my ‘cover story’ with my client.

Whilst I am as keen as anyone to prevent terrorism, I have two problems with this. Firstly, as any architectural photographer will appreciate, we usually need the sun to show a building in its best light. Unfortunately despite the best predictions of the University of East Anglia, GB is not endowed with sunshine so when it’s out, so am I. And generally it has a nasty habit of going behind clouds or disappearing almost before I can get the legs out of my tripod. So the idea of someone preventing me taking a photograph until summer changes to winter is a little difficult to swallow.

More philosophically, perhaps there needs to be a return to the application of a little common sense. It’s unlikely I’m going to be working for a terrorist organisation if I’m wielding camera equipment and a tripod weighing more than five kilos – it’s not exactly designed for the average spy and certainly wouldn’t afford me a quick getaway. And I’m hardly going to be a secret paedophile if I provide the head teacher with my company details, client details and a full set of images of the shoot for approval. So whilst we all want to protect children and keep terrorists at bay, let’s get some perspective on the practicalities and allow people to get on and earn a living. Otherwise we’re going to become a nation of bankers and politicians – which come to think of it, makes photography seem like an honest living!

If you’ve encountered problems in public spaces – of the photographic kind, leave a comment.

Click for more information on I’m a photographer not a terrorist!


Harris » I’m a photographer not a terrorist!